A lot of boys had grown up since the last war. They grew up in a country in shambles, they had no jobs, they had nothing to do, and they were restless. And such men-boys get into trouble with street fights over almost nothing, because of hormones, anger, and boredom. Then they heard a new voice, a very loud voice, a voice promising bread and work for all. They listened because they were trying to find a reason to live. They had been like sheep without a shepherd. They had flocked to a new party, a party good for nationalists, socialist, and workers, even the ones without work. Within the new party, they found new hope to build a life for themselves.

“I will rebuild Germany! I will make Germany great again! Bread and work for all.”

Such was the promise. The leader of this party was an Austrian man called Adolf Hitler. A would-be artist or architect if WW I wouldn’t have taken him off his tracks. A disgruntled Corporal after the war; a Wagner opera lover, intrigued with the mysterious Germanic saga, he imagined building a new ‘thousand year Reich’ with proud, strong, blond, blue-eyed people. He saw himself as the architect of it. His incredible oratory talent, and his rousing speeches, assured him of more and more followers and the help of the rich and the aristocracy. It took him a mere ten years to break up the existing democracy of the ‘Weimar Republic’ Germany had become after the last Emperor had abdicated in 1918. The party of Adolf Hitler had an overwhelming vote in the early 1930s which brought him into the government. Through intrigue, he built up enough power to get the then aging Chancellor Paul von Hindenburg, who saw him for what he was, to retire in 1933 and promote him to be elected to run the country. It didn’t take long and the men heard the call to join a new army. Now there were hardly any unemployed men on the streets anymore. To get free clothing, satisfy their hunger or provide for their families, they had followed the call to join. By 1936 the new army counted already way over a hundred thousand well-trained men. Looting of Jewish owned stores began. Many Jews fled, seeing the writing on the wall, even more didn’t make it. Jews were accused of causing all of Germany’s problems. It was a hate propaganda the world had never seen.

Then came the 1st September 1939. Without warning or declaration of war, the Hitler army invaded Poland. England declared war 2 days later and WW II could not be stopped anymore.

Watching the “News” on television every night for these last years, especially the last several months, I can’t help thinking back to the first ten years of my life growing up with the Nazi propaganda. Now, the terror acts in Europe are frightening. The racial hatred on the North American continent between the blacks and the white suprematists and the emergence of the neo-Nazis is growing. The brawls and shootings in peaceful cities 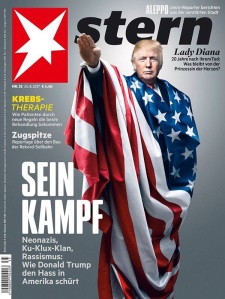 are scary. The Muslims seem to be targeted like the Jews were in Germany, so far not to the same extent. I am not the only one to notice the similarities to the happenings back then and now. When I see the incredibly well trained and disciplined North Korean army and the missiles they promise will be able to reach the USA, what am I to feel? I shake in my proverbial boots. The Germans apparently see it clearly. Why else would one of their most popular magazines, the “Stern”, have such a controversial cover page on one of their recent issues? Do they fear another WW with the number III attached? Do they try to send a warning to the world without many words? They had just changed the first letter of the title of Hitler’s book “Mein Kampf” (my struggle, my fight) to “Sein Kampf”, (his struggle, his fight).

We are living in a dangerous world. We are experiencing history. We don’t know if we will survive a “next time”. 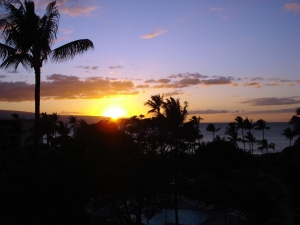 Where is YOUR paradise? Try imagery; – when they tell you in a relaxation class or even for pain relief that you should imagine a beautiful place, let your thoughts fly there, remain, feel the sunshine, see the flowers, hear the waves – where are your thoughts going? Do they go to the mountains, to the sea, or to deep forests? Mine always go to the Hawaiian Islands. For me Hawaii offers ALL facets of beauty, it’s not just a feast for the eyes, the scent of the flowers please my nose, freshly cut pineapples make my mouth water, the warm sand under my bare feet and the sun on my back make me feel good but it is the serenity, tranquility and the sense of the “Aloha” that encompasses all of this in its people in the parts of the Islands that are still truly “Hawaiian”. To truly soak in the “aloha” don’t go where the action is, – look and find the quiet areas. Once, I was under a black velvet night sky with trillions of diamond stars close over my head that I thought I could touch them. It was so endlessly dark and sparkling but it was the unearthly stillness that got to me. I couldn’t help it but I wanted to kneel down and melt and become part of it all.

Does this make sense? It’s hard to explain. I went back to the same spot on the Big Island several years in a row but I have never seen the sky so near and never again had this almost out of body experience. It left a longing in me and I wonder if it will ever be fulfilled. 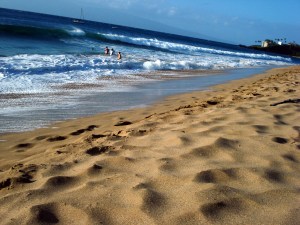 I love old movies. Purely coincidence: I happened to come across the movie “From here to Eternity”. A happy lighthearted soldier’s tale – until, – did you guess it? No, I don’t think so. ‘We Don’t Talk About That’ anymore. Until the Japanese planes appeared like a swarm of hornets and disrupted breakfast on a Sunday morning with many of the soldiers not even up or still in underpants. The scenes of the filming brought back memories of my first visit to Pearl Harbour many years ago. Taken totally by surprise thousands of young men were killed by an attack from a country with whom the US was not even at war. Most of the US Naval ships were destroyed on this fateful Sunday, December 7th 1941. And the USA who had diplomatically tried not to get involved in WWII was drawn into it and the rest is history.

By writing my memories of WWII down in the book published in April 2014 “We Don’t Talk About That” my friends always comment what a relief it must have been for me to “get it all off my chest”. I must admit that the opposite has happened. I have never thought about it as much as I do now and I have never been more interested and involved in war history as I am now. The more I think and read and follow the news and see the larger picture I do see many seemingly small incidents that have had large consequences. It’s almost like a network of roots branching out in every direction. I can’t help asking myself “what would have happened if …?” How would our world look today?

If you have not read my book yet, – do yourself a favour, click on Bookstore above and order it NOW! It will make you think and see how the past plays “catch-up” if we don’t become more alert. Besides, – “We Don’t Talk About That” makes a terrific gift for many readers who appreciate a book “that you just can’t put down…”