Dreaming of Life and Love in Canada 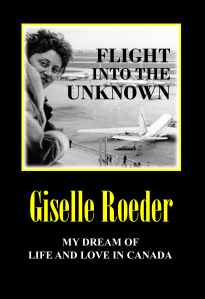 A fancy hotel in Bremen/Germany had lost my reservation. They put me up in a maid’s room above their pub, a few hundred feet away. Afraid to go down for dinner in the noisy pub full of men, I locked myself in and ate my last Granny Smith apple. Without television, radio or books, all I had was a magazine. I read it from cover to cover.
I came across an ad placed by a former German man living in Canada. He looked for a new mommy for his four-year-old daughter. Canada? I was intrigued. I used several pages of the note pad next to the telephone, wrote a reply and never thought I’d get a response. Without being stuck in this small room, I would never have done that.
Four weeks later, I found a large brown envelope with several ‘Beautiful British Columbia’ magazines, a letter with excellent handwriting and several photographs of father and daughter in my mailbox. Wow! I sat there, stunned, staring at all of that. My guts told me ‘watch out,’ but did I listen?
The Canadian man’s father, a lawyer, living in Germany, called me. He knew about the ad; he wanted to know me and told me, “my son is not a fly-by-night. Sit down and answer his letter!”
I did, and an active letter exchange started. I visited the lawyer and his family; they were upper class, kind to me and, since I was a single lady alone in West Germany, I got hooked. Three months later, I got ‘engaged’ to the Canadian man by telephone.
While I was in Spain for a holiday, the lawyer and his wife organized our wedding without ever asking me. I had met another man who tried to talk me out of the Canadian adventure; my parents were upset – but I was in love with the cute little girl and reluctantly went along with it. I did not see a way of entangling myself from the family. ‘Louis from Canada’ came for the wedding a week before it happened. His little girl spook no German, my English was limited.
I left Germany seven months after I had answered the ad and immigrated to Vancouver, Canada. I realized several weeks after my arrival that I had made the biggest mistake of my life. Louis used my hard-earned and saved money to pay his debts to pay for his car and a down payment for a building lot. He even faced me to confess, “I had to increase the loan to come to Germany to marry you.” I had no way of returning to Germany. I had been blinded by his well-to-do parents, thinking, ‘the apple does not fall far from the tree.’
I was in love with the little girl I did not have the heart to disappoint her. She was happy to have a ‘new mommy.’ I was also afraid to tell my parents that they had been right to warn me. I tried hard to make the best of it, took English classes at the YWCA in Vancouver to be able to converse with the kid as well as neighbours. In Germany, I had been a health educator, giving lectures all over the country, and here I felt lost and even stupid without mastering the language. I had lived teenage-years in East Germany, and after I escaped to West Germany, I was considered a ‘second class citizen.’ I did not want to be a second-class citizen in Canada!
We moved to Winnipeg, left beautiful British Columbia after only five months. After just a year, Louis’ second daughter, omitted and not mentioned in his ad, came to live with us. Several months later, I bore a son; I considered him a gift from God to keep the family together. A few happy years followed.
Louis started his own business and went bankrupt. I lost my drive for life, was thinking of ways to end it. Facing suicide several times, I couldn’t do it because of my little boy. Louis told me, “Their first mother left the girls, and if you do that, you’ll ruin them for life.”
Trials and tribulations were my constant companions. Does everything happen for a reason? I don’t know. For the last couple of years after twenty years of marriage, Louis had an affair that led to divorce. I lost everything and moved back to Vancouver, hoping to start a new life.

Available from Amazon, Indigo, Barnes and Noble and Smashwords.