Once upon a time, there was a beautiful girl living close to the ocean. One day she met a handsome but somewhat rugged looking boy who had kept his eyes on her a bit longer than was considered appropriate. A hot shock went through her body and she just knows:

“He is the one I have been waiting for. How do I get to know him?” She shouldn’t have worried because, well, he felt the same way. Encouraged by her unwavering eyes, he approached her, took both of her hands into his rather rough ones, looked at her and told her:

“I’ll be back. Wait for me. After seeing you, my beautiful Moana (ocean) girl, I know I cannot live without seeing you.”

But, there was a problem. She belonged to the Ali’i, the ruling class, while he was just a simple Kama’aina, a local resident. She sat at the ocean day after day, thinking about him. She picked fragrant flowers and fashioned a beautiful Lei which she kept around her neck. On the third day, he appeared like a mirage. He extended his hand to pull her up. They looked deep into each other’s eyes when she lifted her arms, took the Lei off herself and slowly put it over his head to sit on his shoulders. He knew it was her declaration of love. Both started laughing, then, after dancing a few hula steps they were running along the beach, in and out of the oncoming waves. It was a very happy day for both of them. They had many of those happy days – and the days turned into weeks and the weeks into months. Their love grew deeper every day.

On a stormy afternoon, one of her brothers came looking for her and saw what they had been hiding for a long time. He demanded they both come with him to see the Ali’i, the Chief, who happened to be her father. The young couple declared their love and begged to be allowed to get married. The father called for his wife, her mother, and both denied the request.

“You are a princess, you are promised to another Alli’i and you cannot marry a fisherman.”

The young girl, with a breaking heart, told her parents she would never, ever marry anyone else. The Kupuna, her grandmother, put a spell on both, the young girl and the unhappy young man.

“You, Keikimahine, be the ocean shrub, growing deep roots and never be able to leave the sands on the beaches. You will bring forth a simple small white flower, one hardly visible. And you, young man, you will become the same type of shrub but you can only grow in the mountains, far away from the beaches. You may develop the same flower and it will remind you of your forbidden love. You cannot ever again get close to the ocean girl. You will be forever the mountain boy. You may say Aloha to each other with a parting word.” 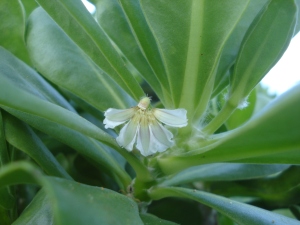 Two hearts were breaking as the young couple was released to go. They promised undying love to each other and forever display it in their flowers. The ocean girl’s flower shows only the lower half of the petals while the mountain boy’s flower only grows the upper petals. Both halves will make a perfect flower with petals all around as it was meant to be.

There was no release from the spell. There was no frog to kiss or a prince who could kiss the sleeping beauty. The way I see it, the half flowers are a reminder to all lovers to appreciate finding their “second half”. 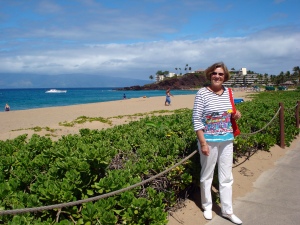 Sorry, dear readers, I have never been able to go into the mountains to find “the second half” of the flower with the upper petals, the half of the mountain boy. But, I have been told by Malihini, my Hawaiian friend, that it does exist. Someone said to me “just turn two of the same halves around, wouldn’t it make a whole one?” It’s not that simple. It wouldn’t fit because of the way it grows. Let’s enjoy a romantic fairy tale that can be told in different ways. This one, I told ‘my way’, the way I remember hearing it told during a “plant walk along the beach”. That tiny little half flower pulls at my heart strings.