No idea what “E – Day” is? For me it is a very special day in my life: Emigration Day.

I stepped into an airplane at the Frankfurt Airport. The plane lifted off and I saw the fields of Germany, seemingly laid out with a giant ruler getting smaller and smaller, the many little villages with the steepled church towers always right in the middle of the surrounding houses placed like toys out of building box. I saw the endless grey line of the autobahn reaching out through endless forests finally giving way to floating clouds and then there was nothing. We were “above it all”. Above the Earth! I had left the land of my ancestors. I was on the way to a new life on a different continent. I had escaped all my troubles I thought… it is hard if not impossible to explain my feelings: Weightless? Floating like a feather in the wind? It had nothing to do with FLYING; – no, I am talking about myself: my emotions, my feelings, even my physical body. When I drifted off into semi-consciousness I had an out-of-body experience: I had no emotions, I had no feelings and I had no physical body. I looked down on myself sitting in the airplane, eyes closed with a crease between the eyebrows, hands folded in the lap. And all of a sudden a desperate small voice woke me up and brought me back to reality:

“Lady, can I have a drink?” My new daughter. The four year old girl cuddled next to me knew I did not speak much English. She did not want to wake up her “new mommy”. She was calling the stewardess. She couldn’t sleep. Her dad was waiting in Vancouver. She was like a pebble on the beach, rolled around by wind and waves. Her mother had left her. For several years she had lived with her dad in room and board, for the last nearly three months with her paternal grandparents in Germany. When I came “home” on weekends she wouldn’t let go of my hand. She was desperate for motherly love and would proudly introduce me to anybody who would stop by: “My new mommy!”

It was December 13th 1963. We had a refueling stop at the International Airport Keflavik in Reykjavik, Iceland. Holding her little hand tightly in mine we seemed the only people on the planet. We walked the frozen grassy airfield for almost an hour before they let us board again and start the long flight over the green fields and mountains of Iceland and the white icy peaks of Greenland occasionally visible through the clouds towards North America.

That’s when I learned that Iceland is green and Greenland is white! I have looked down on Greenland many times thereafter and it always irked me that I did not see any green…but incredibly beautiful white peaks and valleys. It’s hard to believe that there are places for people to live and to make a living. 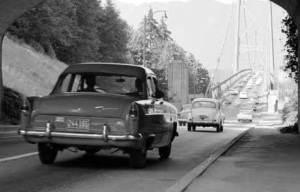 December 14th: One of the most special days of my life: Arrival in Canada. The Vancouver International Airport was a shadow of what it is today. The Vancouver Hotel was the highest building in the city. Halfway across the Lions Gate Bridge my Canadian Husband asked me: “Well? What do you think?”

“This place is too beautiful to live here. It is more like a holiday destination…”

He laughed: “You better get used to it. This is where you will live.” Five months later we moved to Winnipeg and while driving through the Rockies my little girl asked her dad: “Why is mom crying so much?”

And now my friends, I have given away part of the sequel to “We Don’t Talk About That”!

It would make sense for you to read that book to understand WHAT it was that drove me to leave the land of my ancestors, marry a pen friend and have an ‘instant family’. At one point in “We Don’t Talk About That” I had told my parents: “That’s what I want, I want ‘later children’– because neighbours had mentioned that ‘later children’ are easier when my third sister was born. She had been such a quiet, easy going kid.