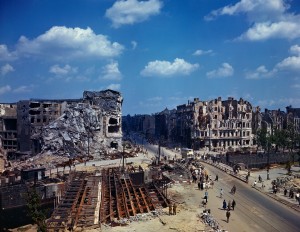 Please forgive me. I just couldn’t come up with a better title. I have been thinking about it for several days now and, you know, ‘thinking is bad for you, it bruises the brain.’ Remember, I used that title for one of my latest blogs. I must admit, all this thinking gave me quite a headache. We have lived such a peaceful life for over seventy years now, the younger generations have no idea what it is like if there are ration cards or how you sometimes have to go hungry. Yes, certain areas of the world have wars going on and it is bad. It’s very bad. Millions of people are fleeing their countries, risking their life in the process. Surrounding countries are ‘overloaded’ already, others try to take as many refugees as they can and some others say “go back where you came from”. The political threat to send people, who have lived, worked, raised families and paid taxes in other than their birth countries, back to their ancestral homelands is frightening.

No, the topic as mentioned in the heading surely wasn’t my idea. My thoughts are going back to the nineteen twenties and thirties when Hitler made his way into world politics and power. Lately, speeches with screaming and promises to clean up racial issues and make America great again reminded me of the opera “Tosca” by Puccini. In the first act, there is a lovely song: “Wie sich die Bilder gleichen“ – “How alike these pictures are…” This expression is now not used for pictures but especially for happenings of a similar nature.

Why do these kinds of thoughts trouble me? I started thinking even more about this scenario after I received an e-mail regarding predictions found in the Bible. Something is supposed to happen at the beginning of this September which, towards the end of the month, leads to WWIII. I do not know the Bible well and, despite having been told what to read or where to find these predictions I am inclined not to look for it. I just haven’t got or don’t want to spend the time. Maybe I don’t want to know. Apparently, there are also listings on Google. How could knowing about it change anything? My correspondent recommended stocking up on groceries as she has done, expecting to feed her neighbours as well. Buy shares in companies who deal in metal. Metal is needed in a war. If you can, emigrate to one of the advertised ten safest countries in the world.

I remember reading a book about Nostradamus’ predictions after 9/11. The author had tried to change the 15th-century language to a kind of picturesque ‘translation’ for the reader to understand what was meant. I skimmed over the last few hundred years to the 21st century. I must say that I was impressed because a number of things had already happened. Starting in 2012 there would be lots of unrest in the world and 2017 would see the start of a very devastating war that would turn Europe into ashes through powerful explosions. Nothing would grow for a hundred years etc. etc. It was quite unnerving. But at that time I didn’t think I would be alive in 2017. And my children and children’s children would have to deal with it like we did with the horror of WWII.

I lived through the devastation of Germany during WWII. I learned as a child what it was like to jump out of my warm bed when the air raid alarm was howling, hear the noise of the bombers, saw the ‘fire in the sky’- heard the constant rumbling of the canons, and the daily crack-crack of the shooting when the last few German soldiers were fighting the mighty Russian army in our neighbourhood. Yes, I also saw the dead and the body parts nobody was allowed to bury in the frozen earth of February 1945. Do I want to even think of all that again? I have written it all down in my memoir, “We Don’t Talk About That”. Maybe that book can become a kind of Bible on how to deal with, and survive, a war.

But, here is what I like to tell the people who are starting to hoard groceries. Did you think of how to cook when there is no electricity or gas supply? Do you plan to buy enough BBQ gas containers? If you have a wood stove, can you even get wood? Keep matches? What do you do when the supply runs out? What do you do if you have to leave your house and the enemy gets all your provisions? That happened to us. A new WW is not going to be a tame animal. Missiles reach across continents – nobody knows where they will land. What if some angry person in power presses a certain button? What if you make it to next spring but you have no food? How do you grow something? In my memoir I talk about how we found ourselves wishing for seeds to plant a garden, seed the strips of land along the road or balcony boxes or even plant in any pots. If it makes you feel better to prepare, (I am also thinking of the predicted “Big One” – an earthquake) make sure you add seeds to your supply, especially of plants that allow you to eat the tops as well as the roots. We survived on turnips and many people of my generation hate the very thought of them. Bread made out of turnips, soup made out of turnips, a stew made out of turnips. Sometimes we found tiny bones in our meals and were wondering if they were from birds or vermin. Every day we went looking for edible weeds, so learn to know what they look like and where they grow.

We also never saw any pets around and when my mother was given the great gift of a (slaughtered) rabbit I remember how she looked at it and said:

“It looks much more like a roof-rabbit to me.” Sadly, she meant a cat.