Can you imagine the triumphant reception when Father Kneipp returned from Rome to his small little village? Not excommunicated, but praised by the Pope? The simple folks at home had trouble pronouncing and calling him ‘Monsignor’ – but he just laughed and said ‘don’t even try, I am what I always was, your ‘Father Kneipp’. He had been sent to Wörishofen by the Archbishop to hide him away, to get him away from the ‘water splashing’ and just be the Father Confessor to the nuns of the existing convent in a small village in the middle of nowhere. These nuns were mainly second and third daughters of rich aristocrats who couldn’t be “married off “, a privilege reserved just for first born babies, sons to inherit and daughters to marry other heirs. The nuns had spent their days singing and praying and were shocked when Father Kneipp told them “Ora et Labora” – pray and work, because work is a form of praying. He ordered them to tend the overgrown gardens, plant and harvest vegetables for the convent’s dinner table and establish an herb garden. They had to perform kitchen duties and clean their own quarters. Tears and complaints about ruining their soft white hands in dirt and sun did not result in suspension from work; pretending to be sick or having a sore back resulted in being treated with water.

The convent was close to bankruptcy despite owning fast stretches of land, meadows and acreages, forests and streams. Father Kneipp found the acreages and meadows were “sour” but knew the farmers would not accept his advice, the advice of a priest, who knew how to change it. Therefore he invented “Fritz” and wrote booklets about “Fritz, the successful Farmer”, “Fritz the Bee Keeper” and several others. The advice was followed and the land became rich and fruitful, the farmers were happy and the convent thrived with “Fritz’s” help.

Despite his book “My Water Cure” to keep them away, health seekers and especially poor people kept coming. The laundry room of the convent became the first treatment center. The odd items used in this “Wash House” are displayed in a specially built hut at the ‘Promenade” in what is now ‘Bad Wörishofen’. Several nuns and handpicked men became helpers and the first therapists. A few curious doctors asked permission to attend Father Kneipp’s hour of seeing people and hoped ‘to trip’ him. The deep knowledge of the human condition and his uncanny right diagnosis, but especially his healing success puzzled them. Some stayed on to learn, others went home all over Europe to start their own ‘Kneipp Spa’. An ever increasing stream of visitors with no accommodations aside from hay barns enticed entrepreneurs to start building hotels, guest houses and restaurants. Kneipp had written more books. He used the royalties and the donations freely given by the wealthy to build two sanatoria, the “Sebastianeum” and the “Kneippianum” and a wonderful “Children’s Hospital” where a mother or father could stay with their sick child until ‘cured’. Kneipp, once upon a time a very poor boy, was now considered “rich” but in truth he did not own anything. He donated those buildings to different catholic brotherhoods (i.e. the Benedictines) to run and take care of other health seeking brothers. There is a rumor the “Sebastianeum” was empty on many nights – and since one entrepreneur had built a hotel for nuns close by that’s where the brothers could be found… Don’t take my word for it! The Children’s Hospital was given to a convent and run by nuns. 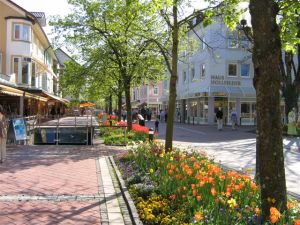 I have stayed in the now, available for both sexes, “Sebastianeum” (168 beds) several times. I always felt close to Father Kneipp as all his advice and his teachings are followed there. I consider him to be one of my spiritual fathers. The “Kneippianum”, still run by nuns today, was developed into a highly specialized clinic for heart disease, employs the best doctors; it owns all the diagnostic machines and tools to diagnose and treat patients scientifically, always complemented by Kneipp therapy.

Let’s go back to Kneipp’s history. He saw up to 200 patients a day. He treated everybody the same, calling them by their first name, rich and poor. He ordered everybody to go barefoot and split wood for exercise, including the Archduke of Austria as well as the Maharadsha with forty attendants from India. Kneipp invented the sandal to give the feet the much needed ‘air’. He visited the Children’s Hospital daily. He fulfilled his duties in the convent as Father Confessor for the nuns as well as his duties when he was voted in as the village priest. He was always available for the farmers who now trusted his wisdom about agriculture. He was called to many surrounding villages to treat or spiritually help the ones who could not come to him. He held daily lectures in an open area about the different aspects of health, often attended by up to 5.000 people. Pearls of wisdom about each aspect he was ranting and raving about made it into our day:

“Fresse and saufe wollet se all” = you all want to eat and drink like pigs but nobody wants to die. When you feel you have eaten you have already eaten too much.”

Bad Woerishofen has many fountains – kids love them!

Part 3 will deal with his treatment system as it was developed and used to this day.