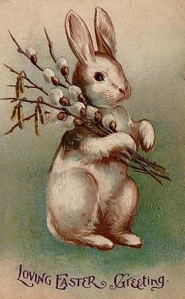 For the last few days, I have been contemplating the fact we have an Easter Bunny and not an Easter Chicken? Doesn’t it make more sense in regards to laying the eggs? But now I know it is not about laying the eggs – it’s about delivering them!

The idea of Easter goes back to the Pagan times. A festival about the Spring Equinox was celebrated, long before Christianity, in the Northern Hemisphere. The Spring Equinox is the day when dark and light are identical, in other words, night and day are of the same hours. The festival was about the renewal of life. The word ‘Easter’ is based on the Goddess Eostre, the “Goddess of Spring and Renewal.” Eggs were the symbol of new life; rabbits are the symbol of fertility. Did you know that a rabbit can get pregnant again before the developing babies are even born? I found another interesting tidbit: For their first-time, a rabbit can get pregnant like the Virgin Mary: It can deliver babies and still be virgin.

Another fact I have often wondered about is the changing date of Easter. This was decided by the Nicae Church Council in 325 AD. They determined that the Easter Festival should always be on the Sunday following the full moon after the Spring Equinox. This is a time between March 25th and April 25th. (Explained by Professor Cusack on Wikipedia)

The name for ‘Easter’ derived from the Jewish Passover in most European countries:

It is Pascha for Greece, Pasque for Italy, Paaske for Denmark, Paques for France.

The Anglo-Saxon English speaking countries retained the name Easter based on the Pagan Goddess Eostre, while Germany calls it Ostern. With the advent of Christianity, the ‘old stories’ about the renewal of life, especially the reclaiming of life by Jesus Christ established Easter as we know it today.

The Easter celebration was brought to America by the German and Dutch immigrants to Pennsylvania during the 17th century. The painting of Easter Eggs started in the Middle Ages in the East European countries. They developed the egg-painting to a fine art. During my childhood, we tinted eggs while boiling them with herbs or flowers, or put our pride in painting blown out eggs with pretty little pictures. These decorated eggshells would be hung on pussy willow or forsythia twigs for a table center.

With the advance of commercialization during the 18th and 19th century, the first sugared eggs were produced in Germany, followed by the English Cadbury company offering chocolate eggs and even chocolate bunnies. Hallmark postcards with Easter Greetings appeared at about the same time.

The decoration of the Easter eggs is still practiced in East European countries, especially in Ukraine. The absolute “Top Egg” would be the Fabergè Egg, today worth a mint and mainly kept in Museums and a limited number in private collections. The Royal House of England has three in their possession.  The House of Fabergè, during the years between 1885 and 1916 had produced about fifty very intricate eggs for the Tsar of Russia. Two a year were ordered as Easter gifts for his mother and his wife. Fabergè also filled orders by other wealthy families. Many of these eggs had small gifts inside, portraits or, in a few cases, even animals, decorated with precious stones. The last two eggs the Tsar ordered for Easter 1917 could never be delivered because of WWI. The Russian Revolution put an end to the luxury life of the Romano family. The whole family was executed. The Bolsheviks had no use for these treasures and sold them to whoever gave them money. Of the fifty Faberge ̀ eggs in the Tsars possession, only forty-three of the “Imperial Eggs” have survived. So it was believed. One was bought at a flea market by a scrap dealer in the US Midwest in 2014 and was almost melted down for its intrinsic value of about $500.00. Luckily, the man Googled it, found a news item about it, flew to England to a Fabergè specialist and could never believe his luck: It was the third Imperial Egg ever made in 1887 and was estimated to be worth 33 million dollars.

3 thoughts on “Easter Bunny and Easter Eggs: A bit of History”