How the h… did I get interested in “pigs?” I’ll tell you! It took me five years to find a ‘Family Doctor’ (regular doctor) when I moved to Vancouver Island. Every medical clinic or doctor I approached ‘did not take new patients.’ A friend told me about a Medical Centre called “The Sow’s Ear Clinic.” I was a bit – well, let’s just say, ‘disturbed’ by the name. But this place is where I ended up and became a patient of one of the doctors about a year later. I went to the ‘emergency drop-in’ one evening. I liked the doctor on duty and asked him if I could become his patient.
“I don’t take new patients. I have about two hundred regulars and that is enough for me.”
He checked my present problem. I mentioned a recent sinus operation that had gone wrong. He was curious and asked more questions. After all was said and done I was surprised by his statement,
“Well, sometimes somebody dies. I will take you as my patient.”
There is a poster on the wall next to the reception desk: 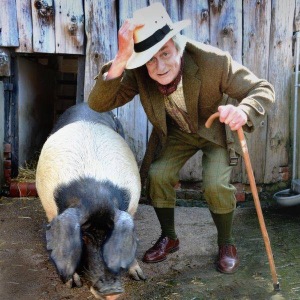 Live high on the hog ♦ Daily mud-baths are the secret to eternal youth ♦ Wallow in mud, not self-pity ♦ Keep your snout out of other people’s business ♦ Don’t exercise too much ♦ Don’t squeal on your friends ♦ Take time to stop and smell the truffles ♦ If you have made your bed, then wallow in it ♦ Sell no swine before it’s time ♦ Stick to a vegetarian diet ♦ If life gives you some slop, then pig out ♦ Oink, snort and be merry ♦ Always keep a little something in the piggy bank ♦ Ham it up ♦ The sty’s the limit ♦ Try not to be a boar at parties ♦ Using your snout can get you into truffles ♦ One person’s sty is another’s bedroom ♦ You reap what you sow ♦ Wallow while you may ♦ Oink before you leap ♦ Don’t hog the conversation ♦ Think pig and you will go far ♦ Go ‘wee wee wee’ all the way home!

Hmm. After I read this the first time, it made me smile, think, and become curious. I wanted to learn more about pigs. A pig for the farmer is the barnyard variety. A sow is a female able to give birth; piglets are her ‘children’. A boar is a non-castrated hog and is larger, older, and a much bigger swine. A wild hog is also a boar. And swine are not at all vegetarians! They are ‘omnivores’. Sows sometimes devour their own children. Sows and their piglets also have to be separated from the other pigs. There have been cases when pigs attacked and ate into human flesh.

Aah! Yes, pigs are very intelligent. I bet they can read your mind. I grew up with pigs – no, not in their sty! We raised and slaughtered two each fall. We made sausages, smoked ham and bacon, canned a lot of meat and lived on it for a whole year. We were never hungry during the war years. The piglets loved and enjoyed my mother’s tenderness – just look at the picture! When they grew up to about 250 pounds and were let out of their sty with a rope around a leg, they KNEW they were going to be killed and screamed blue murder. I also learned that their meat is not as good when they are not killed ‘humanely.’ Actually, that goes for every animal. Tension and stress leave their mark in the harvested meat. Pigs are, from their DNA makeup, the closest relatives of humans and are used for medical research and even transplants. I met a former cannibal on Fiji, donkey-years ago. He told me human flesh tastes similar to pork. Sometimes, when I pound cutlets into schnitzels, I think of it and don’t really want to eat it. The part of a pig that became pork I like best is the smoked ham, especially the Italian kind, the ‘Prosciutto.’
But there is more to the names of these animals. We call people who perform despicable deeds swine or pigs. I don’t know which word is the worst one to use towards a person. Are they physically or emotionally ‘dirty?’ Should it be pig or maybe swine?

3 thoughts on “Pigs, piglets, sows, hogs, and boars are all swine!”