Maybe it’s not my place to tell it. But who else can tell it? The two people involved cannot tell it and the others old enough to know the story have died and the younger ones don’t really remember the way it was. The story is about my third sister, Ingrid, who was such an easy going baby and child of whom people said: “Yes, later children are much easier.” I was six years old when Ingrid was born and had decided right then and there that I would only have “later children”. Our mother always admonished the others of us: “Look at Ingrid! She is never ever sick! And you come up with something all the time.”

We were four girls, each one born with our father’s hope to have a boy. It wasn’t meant to be. After the war he stated “I am so glad for my girls. At least they won’t be cannon fodder in the next war.” I, the oldest and the third, Ingrid, had Mother’s hazel greenish eyes and the second, Christel, and the fourth, Edith, were born with our father’s deep blue eyes. There also was a deep connection within the two pairs. That’s why I know Ingrid’s story. We were very much alike in our looks, our likes, our thinking and our love of books.

It was at my nineteenth birthday party with twenty of my canoe club friends plus our family. We were having fun, cooking pancakes on my new camping stove, flipping them over in the air, and a lot of laughter caused by some homemade wine. Late in the evening I started to “read palms”, telling fortunes and Ingrid was the last one who asked: “Can you read mine too?” Naturally I took a look and without thinking told her “For a start, you won’t have a long life. Your lifeline is very short…” She was only thirteen at the time. I shut up, shocked by my insensitivity. I could not shake a weird sense of premonition.

“Will I still marry before I die?” I knew what I saw but told her little white lies. At least I saw it that way. After all, this was just fun, I really didn’t know much about the “science” of telling fortunes. It wasn’t much later when the party broke up.

Ingrid was fifteen when my parents told me that she was seeing Benno, a boy of whom they did not approve. Benno was a year or two older than Ingrid but he was into drinking and always into fist fights with other boys. His parents could not handle him but he loved his grandma who lived next door to us. He often came to stay with her. I asked Ingrid “Why Benno, there are so many more nice boys around?” but she said “He needs me. With me he is nice and he talks and he wouldn’t drink. Nobody else understands him. I see no reason why I should not see him. We are good friends.” 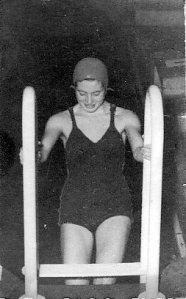 In the summer next year she was sent to a children’s camp as a “sport teacher’s assistant.” Ingrid was an athlete; her fortè was swimming and diving. After about a week she was sent home because of terrible pain in her right shoulder. She could not even lift her arm to comb her hair. She was told by the family doctor not to train, not to swim, rest the arm and in general not to overdue anything. The pain did not go away, it got worse and at the end of August Dad took her to a private doctor. After a thorough examination his diagnosis was a shock: youth sarcoma. He told my father to immediately take her to the Charitè in Berlin, a special famous hospital. Within three days her whole arm was amputated. More tests revealed that the cancer had already gone into the shoulder blade and collarbone. She refused to have those amputated as well. Her statement was “I am already crippled enough; no boy will ever love me and I know I have to die anyway.” Six weeks later she returned home. Aunt Irene, a former army nurse came daily to renew the bandages and make sure she had enough painkiller pills. Ingrid refused morphine. “I want to die with my mind intact. I don’t want to be a vegetable.” 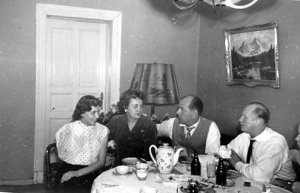 Ingrid without her right arm.

Benno had given up drinking and my parents allowed him to make regular visits. In early December Ingrid’s cancer had grown out of the shoulder cavity as if a new arm was growing up to the elbow. The pain grew worse and she had to go into the local hospital. When Christmas was just a week away my parents asked her if she had a special wish. By this time I already lived in the west of Germany and kept sending items they could not get in East Germany: Chocolate, oranges, lemons; my parents would send a telegram with what Ingrid would like to have. I cried a lot during those weeks and once almost caused an accident with a bus and a car because I biked right into them. I couldn’t see for tears… Ingrid had only one Christmas wish: To come home, lie in her own bed to die. The doctors warned my parents, advised against it because it would be the hardest thing they ever did in their lives, they might not be able to stand it. They were adamant and wanted to grant Ingrid’s wish. They did.

Benno gave her a beautifully wrapped present, a long fancy night gown. It made her happy and sad at the same time. He told her he would wait for her and marry her when she got well, it didn’t matter that she only had one arm, he still had two and they would manage. My parents were upset about the fancy night gown Benno had given her, thought it inappropriate but there was nothing they could do about it. Ingrid had several good days during which she read a book I had sent her. I don’t remember the title. I had read it as well; it was something about five lives we each have of which the last one was about the afterlife. I had been impressed by its sensual spirituality. Mother wrote “Ingrid told me it gave her hope and she is not afraid of dying anymore.”

During January her pain was so bad that Aunt Irene, when injecting her pain medication mixed in a little morphine without telling Ingrid. It helped to ease her plight a bit without clouding her mind; yet sadly, the cancer had taken over her whole body. 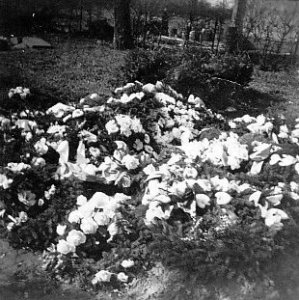 On February 5th her fight with this horrible cancer, the same as one of the Kennedy boys had, was over. She died and was buried dressed in the night gown Benno had given her. He was totally devastated, started drinking heavily and three weeks after her funeral hanged himself.

August 4th is her birthday. She loved gladiolas. I always buy a bunch and think of her. There is no grave I can take them to – they are on my coffee table. She would be seventy-five this year but I cannot imagine her as an old woman. She is forever the young seventeen year old girl.