One of the most beautiful cities in the world is Vancouver in British Columbia, Canada. It offers everything: Mild winters but high enough mountains for the ski aficionado and situated only about 100 miles from the town of Whistler, the world renowned ski resort. If you like water sports you can hardly ask for a more beautiful setting than Vancouver at the blue Pacific Ocean for any type of boating, sailing, paddling, windsurfing, motor boating, fishing and even swimming for many months of the year. You like ships or bigger boats better? Vancouver has one of the most gorgeous inner harbours and it hosts many cruise ships during the summer months since it is the gateway to the Inside Passage to Alaska. I can hardly imagine what Captain Cook or Captain Vancouver must have thought or felt when they happened upon this hidden gem in the late 18th century. All along the coastline were old growth forests, wildlife was plentiful and it surely didn’t take long for settlements to appear after it was discovered.

Fishing and saw mills and later the arrival of the railway brought hundreds of new settlers. Many warehouses were built. The story of “Gassy Jack” is interesting, (use your imagination why “gassy”) a Yorkshire man who noticed that there was no saloon available for the many men. He was smart enough to offer to start one. With eager help from all the thirsty men it was built and finished within a few days (some say overnight) and soon women appeared to add to the fun. The area, originally known as Granville was later renamed after “Gassy Jack” and became “Gastown”. Nowhere could you find more drinking establishments than right here. Over the years and as the city of Vancouver grew this area went into decline and the warehouses were falling into disrepair. Squatters, hippies and many artists had taken over. The area with its architecturally interesting old buildings was rescued in the 1970s when Gastown was declared the most historic part of Vancouver. Tourists now flock to Gastown because of its quaint artsy flavour and it surely is one of the most beautiful parts of Vancouver. It has many wonderful and diverse restaurants and “Gassy Jack’s” statue is a popular photo stop. 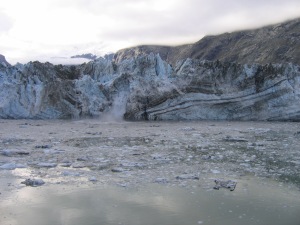 Here you will also find the beautiful new cruise ship harbour. An unforgettable sight is the castoff of cruise ships and their sailing towards the Lions Gate Bridge, along the rich and very beautiful coastline of West Vancouver, the most expensive real estate and retirement place in Canada. You sail through a dreamland as the ship finds its way through the Salish Sea (formerly Strait of Georgia) with majestic snow cupped mountains turning red with the sunset. Unbelievably lovely views greet you while passing Haida Gwaii, a collection of islands at the most westerly point on the North Coast of British Columbia. Most people are more familiar with these islands originally known as the Queen Charlotte Islands.

I was asked once if I knew how God created certain areas on planet Earth. “Tell me”, I replied and this is how it was explained: The different tribes had to line up and when it was their turn they were asked to give their reasons for what kind of land and how much they wanted. Most of them got what they asked for within reason. The Bavarians where very shy and stayed behind until there was hardly any land left when God noticed them. “You get a beautiful region” God told them, “because you are not pushy and you waited. I kept the best for last” and therefore Bavaria and adjoining Switzerland is so beautiful that many people travel there just to see the landscapes and experience the joyful and friendly people who live there. If you ask me I must say that the British Columbia coastline and a sailing experience from Vancouver to Alaska is an incredible feast for the eyes. God must have had more surprises to hand out because this area is wider, grander and totally unforgettable. Yes, somewhat different because of the Pacific Ocean and it has nothing of the dollhouse prettiness you find in Bavaria or Switzerland. Once,

coming back from Alaska I was sitting at a large table indoors with a group of about eight or ten Americans. Everybody had admired the glaciers and the calving when large sections of ice break off and crash into the sea. They couldn’t believe the mighty ice rivers and the ice floats with some seals or seabirds on them and as we were floating on the still waters along the shores of the Queen Charlotte Islands one of the gentlemen said, while dreamily watching the ever increasing loveliness of the surroundings:

”I can’t believe how beautiful this all is. Too bad it’s Canada.”