It was just a year since I had moved myself and part of my business from Winnipeg in the Canadian Prairies to beautiful British Columbia and, to top it off, to the coveted city of West Vancouver. It was 1986 and during those years not everybody had a copier, a fax machine and certainly not a computer. I was lucky because around the corner from my office an elegant, beautiful white haired lady had a small business providing all those services to other small businesses like mine. We started visiting over a cup of coffee when I came. One day I told her that I was flying to Cuba.

“Cuba? Really? That’s interesting. When are you going?” When I answered “tomorrow” she sat back in her chair and asked “do you go by yourself or share a room with someone? Or don’t you do that kind of thing? In case you do, would you mind if I tag along if I can still get a ticket?”

An hour later she phoned me and said “It’s settled. I got the last seat in the plane”. And that is how I got to know one of the most interesting and unforgettable woman in my life. Cuba had opened up for Canadian visitors in 1966 and this was my second visit. I knew it would be appreciated to bring pencils and pantyhose because these things were rare and the Cuban maids doing our room were delighted. We stayed in the (former) Beach House of the Kennedy family, shared a very large room and my only complaint about Cora was that she read all night. I need it dark, but we also talked a lot. She told me about her incredible life in South Africa and that she emigrated to Canada because of an affair with a married man. She needed desperately to get away from him since she saw no joint future and just heartache if she stayed. As you can imagine, we got to know each other quite well. 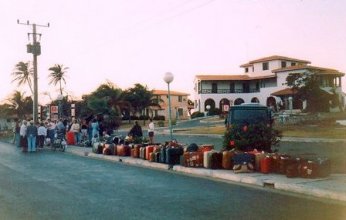 Back in Vancouver I developed terrible back pain. She referred me to her massage therapist whom she had seen for years. “He has the magic touch”, she told me, and she was right. I became a regular in his practice. He had two stepdaughters and his tales often reminded me of my similar former life.

West Vancouver had a famous vegetarian Health Food Store with a Restaurant. “Capers” served the most delicious food and at lunch the crowds where lining up. Often I met there with other business ladies, sharing jokes and laughing our heads off. On one of those occasions I saw Cora standing there, looking around as if searching for someone. I jumped up, greeted her and she said “I am supposed to meet my son here…” I was dumb founded because she had never mentioned she had a son. At that moment my massage therapist came in, saw us, greeted us and then also looked around and said “You two won’t believe it, but I am to meet my birthmother here. I was adopted and I have been searching for her.”

Cora paled, stared at him and said “YOU? I am to meet my long ago adopted son here…”

Phil, the massage therapist who had massaged her for years, also cried out “YOU? YOU are my birth mother?”

Cora, who had told me so much of her life when we shared a room on Cuba but this she had never, ever, talked about. She had sadly confessed that she had absolutely no family. Now, when we met the next time, she smiled her beautiful smile, lighting up her whole face:

“Giselle, first I had nobody for about 50 years and now I have a son, a daughter in law and grandchildren. Can you believe it?” She organized a big celebration on her large deck and all her small business customers were invited. Talking among us we were all incredulous and just kept looking at her, our beaming and gracious hostess, Cora.

For another “adoption” story see “My first train trip”, page 35, in my book and learn how my aunt and uncle hid a Jewish boy in Nazi Germany during World War II, or see “Gerhard’s Story” on YouTube.