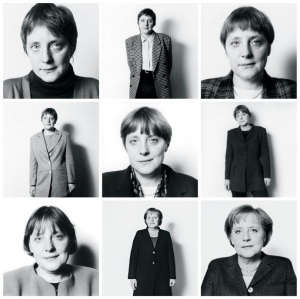 Angela Merkel through the years

Reading this article gave me a whole new perspective looking at or listening to what this woman who doesn’t care for the “lime light” has to say on the world stage. I knew that her father was a pastor and that they lived in East Germany before the fall of the Berlin Wall. I didn’t know that they actually lived in Hamburg when her father decided to take over a post in East Germany where the churches were not favored by the Politicians. I didn’t know that her mother was an English teacher and I had forgotten that Angela graduated in Quantum Chemistry and even has a doctorate. I also didn’t know that she had something with me in common: she was bullied and teased in her young years. I remember my feelings of disbelieve when I heard years ago that she had been elected German Chancellor. She had the guts to say “no” to Obama when he requested something she felt was not appropriate and I admired her for saying the things she did to Putin and his admiration for her: “The first head of State that I can converse with in my mother tongue!” And I was surprised to learn that Putin even speaks better German than Angela Merkel speaks Russian.

The article is not just of her even if she is in the center of it. The writer provides a really good overview of the development of and Germany’s effect on Europe and how she dealt with the problems and leaders of all the powerful states. I am tempted to tell you more – but read it for yourself! It’s lengthy but incredibly interesting. I want to read it again.

George Packer, the writer did more than his homework – thank you so much. Your write-up is better than a history book – because it puts your reader directly into the story.