They were sleeping in four tents next to us. We were camping on the beautiful Isle of Hiddensee. Located between the mainland and the larger Isle of Rügen it was one of our favourite weekend and even holiday spots. Hiddensee was a narrow long island and you could walk from the high cliffs with the lighthouse at the Rügen side all the way down to the other end where it tapered out into sand banks. Starting to paddle or with a good breeze and able to hoist our five square meter sails it would only take us between three and four hours from Stralsund to Hiddensee. We would aim for about the middle of the island, a place called Neuendorf with the fishing harbour, surrounded by typical bright white romantic thatched island homes. These low houses with small windows were hunched down low to let the constant wind blow over them. We had to start walking on a sand bank for the last one or two kilometers and pull our boats until we hit deeper areas again. The island was quite narrow here and had dunes and a nice beach facing the open Baltic Sea. 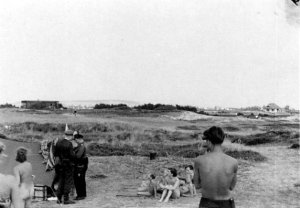 We were four girls in two boats and had two tents. We found a nice camping place adjacent to the nude beach. We were surprised to see fully uniformed policemen checking the passports of the nude people. Where do you carry a passport if you have no clothing on? While we were spending the rest of the day sun-tanning and swimming several other tents had gone up in a row next to us with five single kayaks placed upside down between them. Five very fit looking men in their twenties were organising their blankets and cook ware. When they noticed us next to them they called “Want to have dinner with us? Just soup, – but good company as a side dish and music for dessert. You’ll have to have your own bowls and spoons though.”

For several days they were busy exploring the island and the very few shops in Neuendorf and Kloster, the village closer to the high part of Hiddensee. They would sit on the dunes every night for hours and watch the military search light reaching out with bright long arms over the Baltic, starting at the lighthouse and coming back from the sandbanks.

We planned to attend a costume dance and were busy picking beach grass and making grass skirts. Intrigued they inquired what we were up to. “Can we join you?” We were delighted. Now we did not have to walk home in the dark on our own after the dance. We made more grass skirts and with lipstick painted Indian designs on our faces and bodies. The men had found some feathers to complete our costumes. We celebrated with a kind of dress rehearsal on the beach and a few drinks loosened our inhibitions. With lots of noise we entered the dance hall and celebrated with our own tribal dance. We scalped a few people, and at the end won first price for which we received a bottle of rum. The boys disappointed us by saying ‘good night’ when we suggested sitting on the dunes with them and let the bottle go around. “Tomorrow is another day” were their parting words.

When tomorrow came their camping places were empty. Tents gone, boats gone, not even a garbage bag left. It was as if they had never been there. Inquiring of other campers nobody had seen or heard anything.

What happened to them?

To find out order your copy of “We Don’t Talk About That” right now! Reading this book will make your head spin.