Big expectation for my entrance: The heir has to be a boy. The first born is expected to be a boy. The names of my Great Grandfather and my Grandfather, “Friedrich Wilhelm” frightened me and I decided instead to be a girl. At least they picked a name I liked and there was no other girl called “Gisela” in my village. I liked the shortened version even better and listened when someone called “Gila” or “Gillala”. 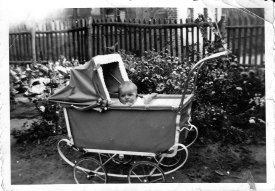 A new pram just for me

My father’s youngest sister Lisa, who became my “big sis” and baby sitter and one year older cousin Siegfried, my second love, after Dad.

Maybe this was the reason I always liked geese, alive or crisp out of the oven (we never had turkey!)

When I was one year old they shaved all my nearly black hair off. Superstition was that I would get really beautiful new hair

Surprise! I became a blond girl. Do blonds really have more fun?