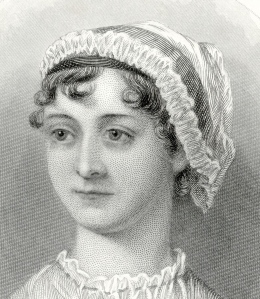 Which book would you take with you if you were exiled to a deserted island? For me, it would be “The Complete Novels” of Jane Austen. I love her ‘stories’, I love her style of writing, I love the way she puts a finger on the sore spots of love and life in the Regency Period. I love her finely sarcastic and witty way of critiquing and expose idiosyncrasies, no matter what the social standing.

During a trip to England a few years ago, we visited the house where Jane Austen wrote most of her novels and where she also died. It is now the Jane Austen Museum, run by a “Jane Fan Club”. I met and talked to several of the women who volunteer at the museum. They spoke of Jane Austen as if she were still alive. Several times I had the feeling she might just come around the corner and enter the room.

Jane Austen was born as the seventh child to her parents George and Cassandra Austen on December 16, 1775. Sadly, she died when she was only forty-one years old. She left quite a number of notebooks filled with unfinished stories. Jane Austen completed only six, now famous, novels. One, I think it was “Sense and Sensibilities”, was published without revealing her true identity when she was thirty-six years old. It was, at that time, socially unacceptable for a lady to be a writer. It was published anonymously. One publisher had exclaimed ‘this could never have been written by a woman’ after reading one of her novels. One of her brothers represented her. He has published her other works posthumously and every one of the books became a great success. He finally revealed the true author’s name. Jane’s books are translated into many languages, are read by and have millions of fans worldwide. Many movies have been made over the years and even more TV mini-series of all her novels. Sales of the Jane Austen books have forever been going up. Her critical view and witty observations of life and love of the landed gentry have become the base of romantic novels to this day. Jane Austen is one of the best known English writers.

At Chatsworth House in Derbyshire, we came across a film crew busy filming a new and more modern version of “Pride and Prejudice”. I was captivated by some scenes taken just outside the great entrance. Oh, would I have loved going inside to see this beautiful place! I looked forward to seeing the new movie starring Keira Knightly and Matthew McFadden. I did several months later – and was disappointed. Not that the movie was bad but I was in love with an old one, the 1995 version starring Jennifer Ehle and Colin Firth. I have seen it several times, and I wish I could do so again and again. I will never forget the scene in the great-room of Darcy’s friend when the eyes of Darcy and Elisabeth Bennet met in an incredibly intimate way.  I had seen it once before I even saw the movie: when my cousin Siegfried came back from a weeklong trip and looked at his wife Annemarie. The way they looked at each other went deep into my soul. I was embarrassed to witness it. The scene is part of my memoir “We Don’t Talk About That”. I remember the phrase “marriage is made in heaven” came to my mind. Theirs was.

I saw “Pride and Prejudice” again, this time on the stage at the wonderful little theatre in Chemainus on Vancouver Island, Canada. We asked ourselves, how can they ever do justice to this complicated story on stage? They did. They picked relevant scenes played by talented actors who truly captured the audience of a sold out house. It was an enjoyable performance which left me smiling all the way home. Chemainus is an intimate theatre with only a small stage but the designers have a knack to come up with ideas that let you forget where you are. It was not the first time that we marveled about their innovation. And to give credit where credit is due, every one of the actors played their part in a believable way. Several actors even portrayed two characters. We hardly noticed, and most people probably didn’t. This story was written about 200 years ago. How much has changed? Not much. We still find the same problems in love, relationships, and life – and maybe some of us recognized a familiar character or two in our own social setting.