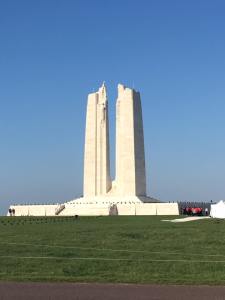 The 9th of April 2017 is an important date in the history of Canada. One-hundred years ago, four Canadian divisions, organised and trained as one fighting force, fought three divisions of Germans who had held the important Vimy Ridge line against the efforts of the French, who lost 150.000 lives in an earlier battle, and, when relieved by the British armies, the situation did not change. The Germans held the ridge. It took the Canadians three days of heavy fighting and a loss of nearly 3.600 lives and over 7.000 wounded until the enemy retreated. For about a week now, television and all social media have been rehashing the history of this battle. It was the biggest and most decisive battle waged by Canadians against the Germans in France.

Watching the news, I asked myself: What actually led to WWI? Was it the assassination of the Archduke of Austria and his wife in Sarajevo as most historians claim? It seems there was much more to it than that. The Emperor of Austria-Hungary had his eye on the Balkan states. He annexed Bosnia and Herzogewina in 1908. After the assassination in Sarajevo the Emperor wanted to annex Serbia but the ultimatum was rejected. It took several weeks before the, then almighty, Austria-Hungary Emperor decided to declare war on Serbia and Bosnia, two revolutionary and terroristic states of the Balkan. The Balkan war was supposed to be all there was, a “small” war about territory that led to the so-called “Great War”. Austria, which was not really prepared for war after a long period of peace, called on their German ally when Russia prepared for fighting on the Serbian side. Russia also allied with the French, and it didn’t take long before the whole world was on fire. Those are the underlying causes as I see it.

I read somewhere “WWI was a political misjudgement…” – a misjudgement that cost around 38 million lives. Does that shock us? For me, it is a much bigger shock to think about the 10.000 casualties of the Canadians fighting and winning the battle of Vimy Ridge in less than three days.

Now, one-hundred years later, we celebrate those brave men, some younger than eighteen and some lying about their older age just to go and fight. A forty-year old miner would have lived if he had not lied about his age and registered as a twenty-eight year old man. It is hard to imagine that in Canada, a country with a population of less than eight million in 1914, 619.000 men enlisted. 66.000 did not return and 172.000 were wounded. The stories we hear on the news are incredible. Many people have diaries written by their ancestors, letters and photos. Everything pulls at our heart strings. Thousands of Canadians have traveled overseas to be part of the 100-year celebration. Newest reports say between 25.000 and 30.000, including thousands of young high school students from all over Canada, attended the celebration at Vimy.

The impressive memorial at Vimy was built to honor around 11.000 dead Canadians with unknown resting places. A competition for the design was open to all Canadian architects, designers and sculptors after 1920. Of one-hundred and sixty designs, two were finally selected by a commission in 1921. William Lyon Mackenzie King, then Prime Minister of Canada, argued for the design by Walter Seymour Allard of Toronto and got unanimous support from parliament. The French donated 100 hectares of land

where the battle was fought under the condition that Canada build and maintain a memorial park. Mr. Allard searched far and wide for the right stones and found them in Croatia. The construction of the monument began in 1925 and took eleven years to complete. His Majesty, King Edward VIII, also considered the King of the young Nation of Canada, unveiled the memorial on July 26th 1936 with 50.000 people in attendance.

During his speech regarding the memorial, His Majesty stated:

“It is an inspired expression in stone, chiselled by a skilful Canadian hand, of Canada’s salute to her fallen sons.”

2 thoughts on “Vimy Ridge: The Battle defining Canada as a Nation”