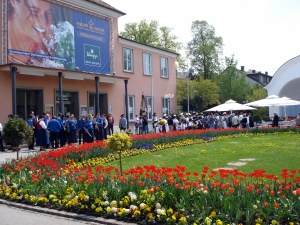 May Day is a traditional holiday in several European countries but for me the intriguing part is what leads up to it in Bavaria. A few weeks before the first of May the young males of every village go scouting for the straightest and tallest tree in the surrounding forests. Once they find “the one” they have to guard it to avoid it being claimed by the young men from another rival village. Before anybody can cut any tree they need permission from the Forestry to cut it down and bring it home. Once permission is granted the tree is marked. Now the dangerous game of protecting your own tree and trying to steal another marked for another village is in full swing. The young men of every village, and there are many villages every few kilometers, get involved and they are busy every night with the protection of “their tree” because attempts to succeed are made by every single one. Why? If one village or another succeeds in ‘stealing’ a tree the loser has to pay for all the beer they will drink during that year whenever there is a chance or they get together. I wonder how much beer is already consumed during the cold nights protecting their prospective tree! 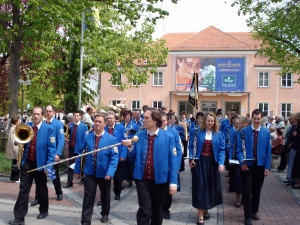 The tree has to be cut and brought home in the old fashioned way, no machinery allowed. It also has to be erected without any help of modern conveniences. Ropes and muscle power is what’s needed. The bark is removed in a certain way to leave a design according to tradition in the particular village. Once the tree is “up” a wreath, called a “crown”, is hung at the highest possible spot, often they even attach another small tree on top to reach even greater height. Eighty or even hundred meter high May poles are not rare. All the way down from the top carved logo signs from every profession in the village or city are attached. I gather that those professions, be it a tailor, shoemaker, farmer, hotelier or even the church have to pay to have their painted carvings depicting the profession on the May Pole. And they are proud to do so! Most villagers get 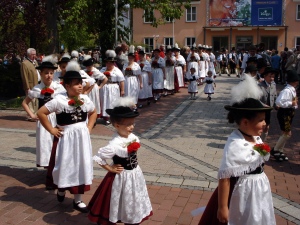 involved in the erection of the tree and especially the celebrations during and after they completed the task. Since it is hard work without any mechanical help the men get very thirsty and again lots of beer will find its way into thirsty throats. Usually there is a brewery in the village or close by and they have a fresh brew, the May brew, which surely has to be tested as well. After the May Pole is proudly standing and secured the people hurry home because now they have to prepare for another happening.

April the 30th is ‘Walpurgis Night’. It’s an anxious and frightening night for all the villagers. It is the night when all the witches are loose and they do some crazy things and no one stops them. One year I happened to be in the beautiful Bavarian Health Resort city of Bad Wörishofen and my hosts were taking all their lawn chairs, terrace furniture and garden ornaments into their hallway. They explained to me that these items could end up in a totally different part of the city or even hidden in places you wouldn’t think of looking for them, in some cases overturned or broken. Police? Forget 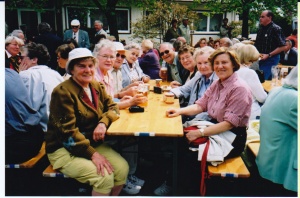 it. After all, the police do not deal with ‘witches’. It’s free rein to do mischief without being punished. Mostly it’s all done in good fun. During breakfast next morning we had a really good laugh because something “new”, never done before, had happened. All the street signs were covered and new names making fun of certain officials or happenings in the village were placed on top. The one most people got a kick out of was “Roter Platz” (Red Square) at the centre surrounding the statue of Father Kneipp, the “Water Doctor”, a priest who had made this city famous during the 19th century. (As a matter of fact, at least 95% of the population still make their living catering to the “Water Kur” guests.) This plaza had recently been tiled with red tiles and the former grass and the flower beds had been removed. The old-timers in the city didn’t like the transition and this joke did not go over too well with the Mayor’s office either. However, the old street names were restored within a few hours.

The first of May is a big holiday! Literally everybody has been praying for sunshine and, with luck, the weatherman has listened. People gather in their old fashioned costumes around the “Kurhaus”, the bands tune their instruments and in good time a parade winds its way throughout the city aiming to end the march at the May Pole. There are lots of stalls with bratwurst, pretzels and beer (of course!), herring buns and home-made torts and cakes hosted by the different women’s groups. There is coffee, ice cream, sugar puffs and drinks for the children and more beer for the ones who 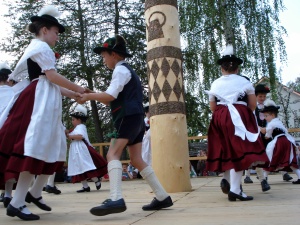 happened to be lucky enough to find a seat for the rest of the day. The bands play their catchy tunes, the folk dancers as young as two years old or ninety congregate around the May Pole and do their infectious dances and lots and lots of cameras click to catch the excitement. When the official part is over the pubs fill up and the new fresh Maybock beer leads to the downfall of many a drinker who overestimated their capacity to “hold their beer”. But May Day is fun, it’s so much fun! If you ever have a chance to experience it, – rather than aiming for a big city, try to find a smaller village and mingle with the ‘natives’. And be sure not to overestimate your capacity for the Maybock!