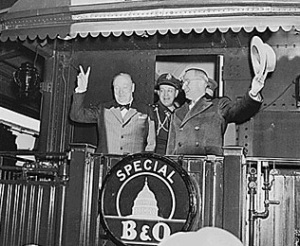 It was on March 5th 1946, ninety-nine years ago, just one year after the WWII victory of the Allied troops. Winston Churchill who had failed to be re-elected Prime Minister of Britain was invited to give a speech at Westminster College in the small city of Fulton, Missouri in the USA. Winston titled his talk “The Sinew of Peace”. Winston Churchill was accompanied by President Harry S. Truman to Fulton, population 7000. However, the crowd numbered 40.000 to hear the speech which became famous as the “Iron Curtain Speech”.

Churchill pointed out that he was not speaking as a politician or a statesman, but as a private person and these were his personal thoughts and opinions. Before the speech the US and Britain had been concerned about their post-war economy and were extremely appreciative of the proactive role the Soviet Union played in ending WWII. This speech changed the view with which the democratic West viewed the communist East.

I quote from this speech:

“From Stettin in the Baltic to Trieste in the Adriatic, an ‘Iron Curtain’ has descended across the continent, the division of Europe into east and west. Behind that line lie all the capitals of the ancient states of Central and Eastern Europe. Warsaw, Berlin, Prague, Vienna, Budapest, Belgrade, Bucharest and Sofia; all these famous cities and the populations around them lie in what I must call the Soviet sphere, and all are subject, in one form or another, not only to Soviet influence but to a very high and in some cases increasing measure of control from Moscow. The Russian-dominated Polish Government has been encouraged to make enormous and wrongful inroads upon Germany, and mass expulsions of millions of Germans on a scale grievous and undreamed-of are now taking place. The Communist parties, which were very small in all these Eastern States of Europe, have been raised to pre-eminence and power far beyond their numbers and are seeking everywhere to obtain totalitarian control.”

Let me intersperse a personal note here. With my family I was just one of the millions evicted and on the road to nowhere next to the Russian war machinery on their way to conquer Berlin. Later I was just one of the people required to join the Communist Party or else…I was just one of the hundreds of thousands who escaped before the Berlin Wall was built to keep the inhabitants from leaving the country. Thinking back it is unbelievable how it was possible for people to live like that or how it was possible that so many became faithful loyal communists. And how the boys we grew up with were able to shoot at you trying to escape. Reading the full content of Churchill’s speech I can’t help but admire the man for his foresight. It is incredible to think that he was speaking to 40.000 people about as he put it, his private thoughts, in a small American city that had not endured any of the wartime atrocities committed by all sides.

It is believed that this speech was the beginning of the Cold War. Churchill went on to explain the close connection the UK had with Russia over many years before and following WWI and briefly mentioned his wartime ‘comrade’ Marshal Stalin. He pointed out that the US was standing on the pinnacle of world power together with the responsibilities and even the anxiety that would go with it. Not even a year after WWII he envisioned another war if precautions were not taken seriously and soon. Quote:

“When I stand here this quiet afternoon I shudder to visualise what is actually happening to millions now and what is going to happen in this period when famine stalks the earth. None can compute what has been called ‘the un-estimated sum of human pain.’ Our supreme task and duty is to guard the homes of the common people from the horrors and miseries of another war. We are all agreed on that.”

Churchill talks about the UN, the successor of the League of Nations. He points out the strong and the weak spots. He envisions an army made up of all member nations but is against giving them all the power especially not the secrets connected with the atomic bomb. He even sees the army from every country involved wearing the same uniforms with just different badges. They should be trained in their own country but moved around under the power of the organisation, however, they should never be required to move against their own country. Churchill stated he had this vision already after the first World War.

He went on to speak about police states, dictatorships, people living without rights, free elections, or without fear. But Churchill pointed out “we have no right to interfere in countries we haven’t conquered in war, –

but we must never cease to proclaim in fearless tones the great principles of freedom and the rights of man which are the joint inheritance of the English-speaking world and which through Magna Carta, the Bill of Rights, the Habeas Corpus, trial by jury, and the English common law find their most famous expression in the American Declaration of Independence.”

He talked of hunger, starvation and deprivation on this day, March 5th 1946 that has not been overcome as of yet. He quoted an old friend of his, an actor, Mr. Bourke Cockran, who told him “There is enough for all. The earth is a generous mother; she will provide in plentiful abundance food for all her children if they will but cultivate her soil in justice and in peace.” He foresaw an unprecedented age of plenty coming. Looking back over the last 60 years he was right. Never have people lived so well. He went on to extoll the need to adhere to the principles of the United Nations to prevent another war. He said “I do not believe Russia desires another war, what they desire is to enjoy the fruits of the war and the expansion of their power and doctrines.”

I would like to finish the excerpt of Churchill’s famous speech with these words of his:

“Last time I saw it all coming and cried aloud to my own fellow-countrymen and to the world, but no one paid any attention. Up till the year 1933 or even 1935, Germany might have been saved from the awful fate which has overtaken her and we might all have been spared the miseries Hitler let loose upon mankind. There never was a war in all history easier to prevent by timely action than the one which has just desolated such great areas of the globe. It could have been prevented in my belief without the firing of a single shot, and Germany might be powerful, prosperous and honoured to-day; but no one would listen and one by one we were all sucked into the awful whirlpool. We surely must not let that happen again.”

My question to you today: Where is the “Iron Curtain” Churchill talked about in 1946 now? Do we still have an iron curtain? Have Winston Churchill’s statements from March 1946 value today? What would this far-thinking man say to us if we could listen to him now, close to 70 year after this famous speech? Who is whispering behind the ‘Iron Curtain’ now?