We met Ed and Lucy on a Panama Cruise. We shared a dining table with another couple. It’s funny but I cannot even remember their names or faces. They never stayed after dinner, they came and went and seemed to be busy, busy, busy. When they were there we did not talk very much. Ed and Lucy were elderly darlings. It was incredible to see how tenderly Ed helped Lucy, pulled out her chair, put a scarf around her shoulders, held her elbow when walking in and out of the dining room and always had his warm, shining eyes on her. 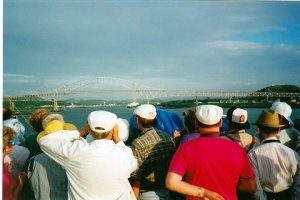 A historian was telling the story of the building of the Panama Canal over a loudspeaker while we sailed through it and everybody crowded around the railing at the bow. People were jostling to take photographs and pushing their way through masses of people. I remember that I needed to go to the restroom but didn’t dare to leave and lose my spot. We stood out there for hours while the voice over the speaker was droning on. Ed had found a place in a corner with a kind of exhaust funnel that was big enough for Lucy to sit on. He had to lift her up there like a child and then was standing behind with his arms around her, to keep her safe. Lucy was glowing, was smiling at everyone and especially at Ed. Whenever we met them on land during stops and outings they always held hands or he had his arm around her waist. He would buy her a single rose which she would pin on her dress or jacket when coming to dinner. During my teenage years I thought this kind of tenderness a bit silly. In later years I was touched almost to tears when I saw older people holding hands. Did I feel jealous because I never had that kind of attention? No, I felt sad and I wished…. Once I asked a trusted male friend why this never happened to me. He told me “You seem too confident, you don’t need a man to take care of you and men instinctively know that. No man would dare to just do it. It would have to come from you.” Hmmm… Once, at a convention in New Orleans coming from breakfast, a gentleman in our group grabbed my hand when we crossed the street. I pulled it free as soon as we were on the other side. He looked at me and said “You don’t like holding hands, do you?”

Back to Ed and Lucy. Once dinner was ordered they would hold hands under the table, sometimes even on top of the table until the other couple arrived. I noticed that their legs under the table always touched each other. After a few days and feeling more comfortable with them I mentioned my admiration for the display of their apparent love. They looked at each other, she nodded and Ed told us their story.

They were both widowed. Together they had been married hundred-and-two years, albeit to different partners. She came from a large family and still had six living siblings, the oldest 82, the youngest 71. She was 78, her next younger brother was 77 and not well. Ed was 79 and alone since he had lost his wife. They lived in the same city in Florida but had never met. A good friend of Ed’s who felt sorry for him invited him to come to his church in another part of the city to join a group of people who met once a month for coffee and cake. Ed happened to be placed next to Lucy. He mentioned “I was very shy and quiet. Lucy was an extrovert. She soon helped me to feel relaxed. We had a lovely time. When the social broke up I was afraid I would never see her again and dared to ask her:

“Would you like to meet me for coffee tomorrow?”

She looked at him for a few seconds and he started to lose heart. But finally she said:

Again they had a good time. He told her that he was able to cook a real good spaghetti dinner. When she looked at him expectantly he asked:

“Would you like to come to dinner to my house on Saturday?”

Again she let him wait for a few seconds and then just told him:

The dinner, three days later, was a success. He showed her the house, photographs of his wife, they laughed a lot and before she left he asked her:

She looked at him for a long time. He was afraid he had been too hasty. But then, a big smile spreading across her face, she said:

The old gentleman looked lovingly at Lucy, held her hand across the table and Lucy continued the story. She told us “we were married three weeks later, are married for a week now and we are on our honeymoon.”

At the next stop in Curacao, on the coast of South America when we came back to the ship a bellhop with luggage followed by Ed and Lucy came down the gangway. Lucy was crying. I couldn’t help asking why they left and was very sad to hear why their honeymoon had been cut short. Her younger brother had died and they wanted to be at his funeral. I hugged both of them and said Good Bye and Ed whispered to me:

“Don’t be sad for us, I’ll take her on another honeymoon.”

This is my true Valentine story for 2015. Now in my “golden years” myself, I understand their kind of love. Cupid’s arrow hits independent of age. Isn’t that comforting to know? Make each day count, because none of us knows how much time we have left.